Pokémon Unite is an upcoming free-to-start, multiplayer online battle arena (MOBA) video game developed by TiMi Studios and published by Tencent in partnership with The Pokémon Company for Android, iOS, and Nintendo Switch. It was announced in a Pokémon Presents presentation on June 24, 2020. A release date is yet to be announced. 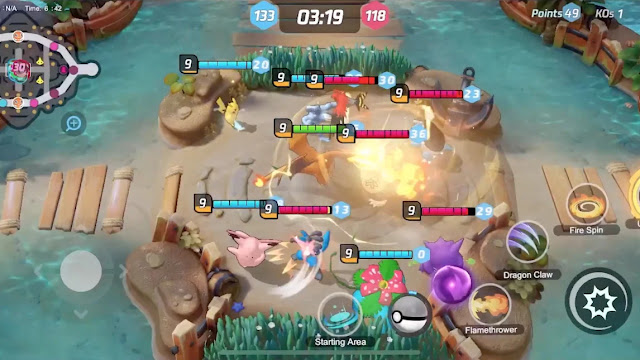 Pokémon Unite is a multiplayer online battle arena game with matches consisting of 5 players on each of the two teams. The game map is split into two halves, with multiple control points each. Players score points for their team by defeating AI "wild" Pokémon (referred to as catching in the game), and move towards one of the control points to score "goals". Each match is time-limited, and the team with the most total score by the end of each match wins the game. Players start each game controlling unevolved, low-level Pokémon, which can increase its level and gain access to new combat moves as it wins in battles. Type effectiveness, a common feature in Pokémon games, is absent from Pokémon Unite. On the other hand, the game includes an "Unite move" mechanic unique to each Pokémon character.

The reveal of Pokémon Unite received mixed criticism, with outlets discussing the game potential to open a new competitive gaming scene to a new audience. On the other hand, the YouTube videos of its announcement receiving thousands of dislikes, one of which quickly became the most disliked on The Pokémon Company's YouTube channel. The discontentment was attributed to the involvement of China mobile gaming giant Tencent, the free-to-play model, and the hype and expectations set by the previous Pokémon Presents, which announced the game as a "big project". This misled fans to believe that a new RPG main core series would be announced; therefore, when this game was revealed, many people were disappointed because it is a spin-off game with a mobile release.

Presents presentation: June 24, 2020
Beta version: TBA...Maybe sometime during this year
However. I believe that a final launch across all platforms will take place in 2021.
I will try to update the latest news about it on this site...

Context A couple days ago(June 24), The Pokémon Company  announced   Pokémon Unite , a MOBA game of its partnership with Tencent and TiMi Studios. However, their first product get so many dislikes from Youtube User. After only a day of existence, the  Pokémon Presents  that revealed  Pokémon Unite  is Nintendo’s most-disliked YouTube video to date. Currently, The video was deleted from  The Official Pokémon YouTube channel  but you can see how that video was via  Wayback Machine - Internet Archive You can see these are about 24k likes and 30k dislikes: Why Why does  Pokémon Unite  have so many dislikes? 10%: The Nintendo Switch was flipped. I don’t think this is the main reason that caused the dislike storm to the video. It just flipped like we take a selfie by font- camera. 70%: The Pokemon Fans are expecting something special, not a MOBA game. A few days before the first revelation about Pokemon Unite, The Pokemon Company held a special Poke
Read more

Context We had some leaked news after the interview with  Masaki Hoshino  (Producer of “Pokemon Unite”) How To Play The basic rule of the game is to defeat the  wild Pokemon  on the field to get  points , and to score them in the opponent’s goal, it will be their own score, and the team with the most points will win. In Pokemon Unite, when you defeat a wild Pokemon, you will get points and if you put it on the target of the enemy, you will get points, So it was great when the team defeated Pokemon that the opponent was capable of defeating first. It will be a donation. Even if you can’t win a one-on-one battle and run away, this game can have various contributions, such as “that person defeats a wild Pokemon”. Therefore, person who is not good at MOBA games can shine in Pokemon Unite. Is It a MOBA game? Multiplayer online battle arena (MOBA) is a subgenre of strategy video games in which each player controls a single character as part of a team comp
Read more